Architecture in Vietnam is a melange of styles, a reflection of its more-than-a-thousand-year old history, French colonization, American influence, and the recent opening up of its market and culture to the world.

The types of architecture can be classified into five main categories – vernacular, Chinese, ethnic, colonial and modern.

In spite of the country’s extensive history, few buildings in Vietnam are more than century year old, there are some notable exceptions, nonetheless. Unlike Europeans, Asians do not venerate old place of dwellings or worships. Even in the recent past, when a house, a temple, or a pagoda fell into disrepair, it was either knocked down and replaced, or extensively renovated. When a Vietnamese person says a building is ‘old’, he or she means that its original purpose has been preserved on that site, not the building itself. Recent exposure to organizations such as the UNESCO World Heritage Site Program with a mandate to conserve cultural relics has led to a greater concern to retain the original integrity of old buildings, but most of the skills and knowledge of the craftspeople who built them have forgotten. 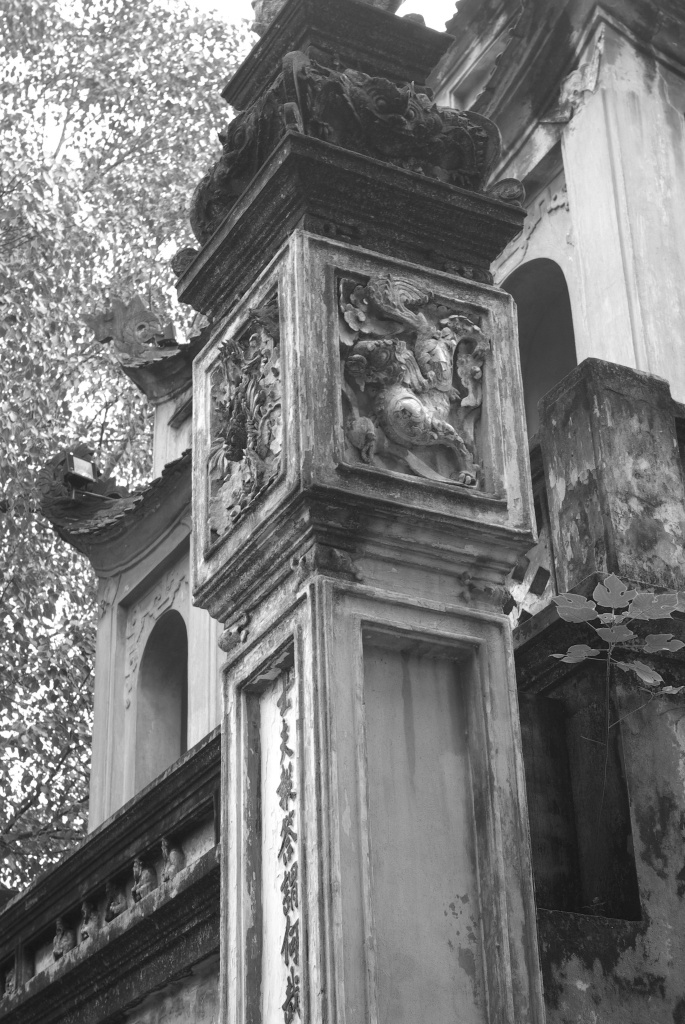 Vernacular Vietnamese buildings are distinctive- unlike most of the rest of Asia, they have a massive wooden framework, rather than the lightweight ‘stilt’ method used elsewhere. Good examples can be seen all over the country, and particularly in the villages around Hanoi. Larger public buildings, such as ‘communal houses’, are also of wooden construction. Stone and brick were reserved for royal or significant religious buildings. Nearly all vernacular buildings were single-storey, with heavy flat-tiled roofs to withstand typhoons. None had ceilings or chimneys.

The Chinese influence on Vietnamese architecture is seen most clearly in pagodas and palaces. The distinctive roofs with elevated hip rafters and half-round tiles, heavy ornamentation and lavish use of embellishments and motifs are distinctive features. However, although superficially similar to their Chinese antecedents, the architectural details of Vietnamese pagodas differ greatly. However, the layout, orientation, statues, steles and other external elements of pagodas are usually Chinese in origin. 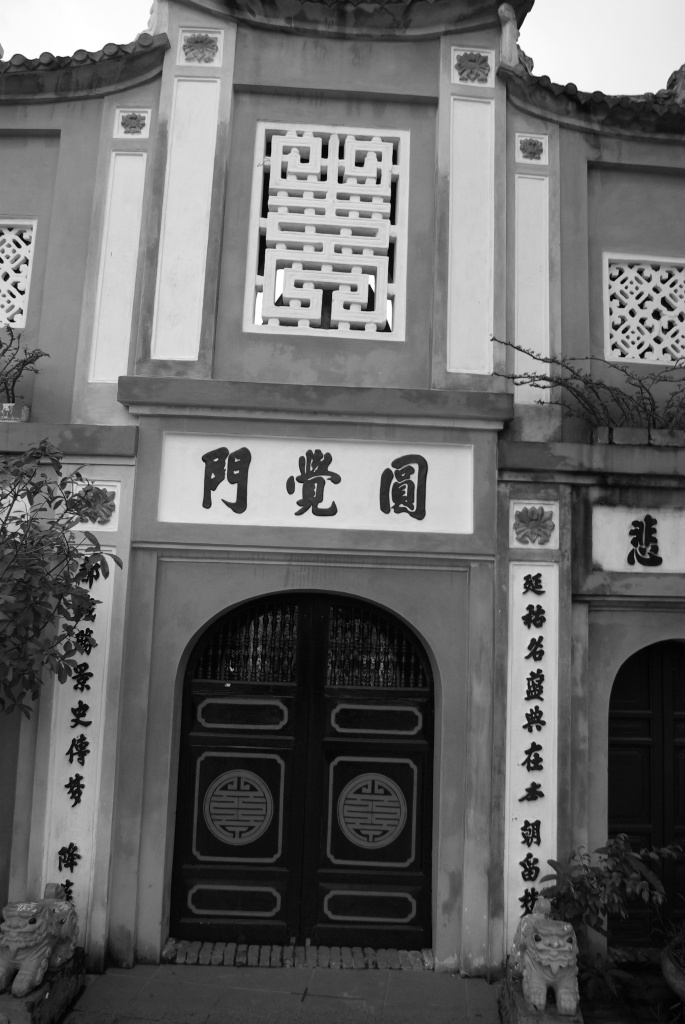 Vietnam has many distinct ethnic groups, and many have preserved their indigenous architecture, some of which is highly attractive. The 30m long sweeping straw roofs of the Ba Na ‘rong’ houses and the E De long houses that sometimes extend over 100m are particularly interesting.

Vietnam’s colonial buildings are more than a straightforward replica of French architecture. Adapting to a very different climate led to many distinctive features, making the style into a genre in its own right. Good examples of colonial buildings can be found all over the country, but especially in Hanoi, Da Lat and Hai Phong. The General Post Office and the Town Hall in Ho Chi Minh City, the many mansions and the Opera House in Hanoi, and the interior of the Municipal Theatre in Hai Phong are all splendid examples.

Heavy taxes on the frontage of old vernacular town houses led to the long, thin ‘tube’ houses of Hanoi and Hoi An. Today, spiralling land values and status has placed a premium upon height. Narrow houses built on a handkerchief of land rise as much as seven or eight stories to overtake the neighbours. They are often built in a strange pastiche of French architecture with ornate balconies, cupolas and decorations fashioned in cement and concrete and painted in pastel colours. High ceilings, ceramic tiled floors and large windows reflect the climate, but the extensive use of wrought iron screens and shutters on windows, and metal gates and doors, are the response to a high level of burglary!

Outside the towns and cities, public buildings tend to be functional rectangular buildings with little architectural merit. Particularly in Hanoi, but also in Ho Chi Minh City and other cities, there are several interesting examples of Soviet architecture dating back to the post-French war period when the influence of the USSR was at its strongest in Vietnam. Good examples are the State Bank, a blend of Soviet and oriental styles, the People’s Committee building, typical of the Soviet ‘brutalism’ architectural period, and Ho Chi Minh’s Mausoleum. All three are in central Hanoi.

One of the narrow alleyways that connects communities in the city.

More recent public and commercial building architectural styles have varied from the pseudo-classical façade of the Trang Tien Plaza shopping centre to the futuristic Sofitel Plaza Hotel, both in Hanoi, and to the glass and concrete high-rise towers of Ho Chi Minh City.

With the coming of other religious organization, it is not anymore surprising to see Catholic Churches, dominating the skyline and looking totally detached from the architecture of surrounding buildings. These churches are found right in the center of the city imitating the Cathedral of Notre Dame in France.

A Catholic Church in Hai Phong, a port city north of Vietnam 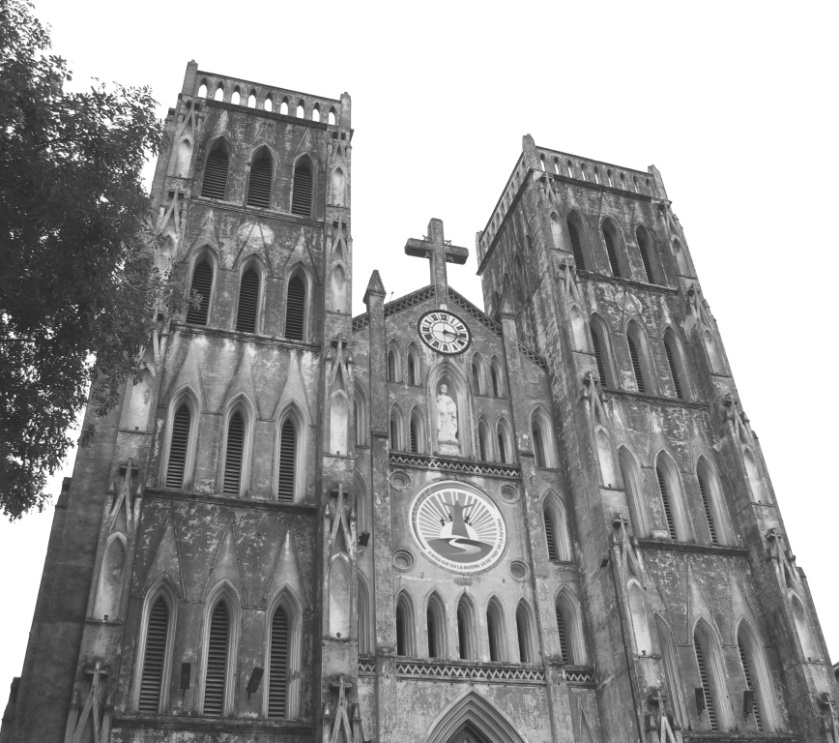 The Parish of St. Joseph located right at the heart of Hanoi, just a few meters from the famous Ho Hoan Kiem

12 thoughts on “Smorgasbord of styles in Vietnamese architecture”