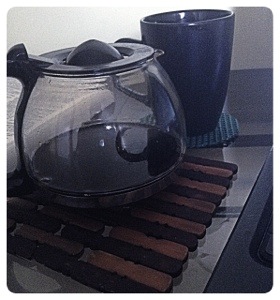 You know the feeling. That instance of impact of slightly reheated slimy coffee that has gone untouched for three days (or you don’t know how long it has been standing there, really, breeding colonies of bacteria and fungi), on your unsuspecting tongue, well not exactly unsuspecting as you are still able to keep a semblance of a well-kept apartment, so you have an idea what you will get yourself into and probably how long it has been since the last time you brewed coffee; still you go on as it doesn’t matter now.

You have an interesting idea in mind, something unique, life-altering if only it were given an existence that can be grasped by the senses, your computer is on, Michael Buble is filling the place with his velvety singing.  You just need your cup of coffee to complete the feel, so you can finally see in writing that idea gestating in your mind for the past thirteen minutes and is now ready to be C sectioned or be given birth naturally (This metaphor bothers me, but I think it sounds nice. I’ll wait, fifteen minutes, perhaps. If it still sounds interesting to me after reading my final draft, then the metaphor will stay).

But your cup. It is giving you that gnawing awareness, warning you, of a forthcoming melee. Between your stupid self and the radioactive content of your mug.

But you had it before, back when a 3-in-1 would do, back when you didn’t know the difference in taste between a five-peso-per-sachet mixture of sugar and artificially flavored coffee declaring itself “Italian taste perfected” and the overpriced but definitely more decent tasting signature coffee sold in a nearby coffee shop chain which high school students from an exclusive Catholic school located across, wanting to look cool, sip affectedly with a stick of cigarette in between fingers during breaks from their dull afternoon classes.

You know how it tasted. How evil it tasted. That mixture of 3-in-1 dissolved in tap water heated below boiling point gushing from your dorm’s rusty 1950s lead pipes. You know how it tasted after having stood on your study table for two days undisturbed, ants free diving in it, vacationing while their queen lay waiting for her loyal worker ants to bring back the loot.

But like then, you choose to ignore because there are many things in life that simply can’t wait. A great idea is one of them, unfortunately this time. And so, you sit in front of your ailing computer, ready to tackle the mocking-as-it-has-always-been blank, white space. And you begin typing on. It runs smoothly, your mind, that is; writing never felt this good before. The idea comes out as if it is unencumbered by the circuitous organelle-dotted canal that connects it and the bright and brave world outside.

Then you think, “where’s my mug of coffee?” You extend your arm; take hold of the handle of your favorite mug without looking, your rapt attention on the screen. You bring the mug close to your slightly parted lips. The stench gives you some warning, but you opted not to take heed. Your idea is approaching its most crucial leg, you can almost see the head. Then you take a sip. No, a gulp.

Then you know how stupidity tastes.

Error: Twitter did not respond. Please wait a few minutes and refresh this page.