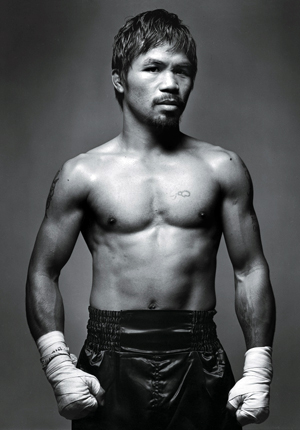 There is no denying that Manny Pacquiao is the best fighter in the world. His name permanently etched in the history of boxing and sports in general as the only man who has captured the boxing belts in seven weight divisions. A feat doubted by, of all, the Filipinos themselves. But for most Filipinos, he’s the only hope that a Filipino can be the best in the world, to tower above everyone else, if he puts his sweat, blood, and soul on whatever he does.

When everything has settled, the euphoria quieted, I ask: When will they stop sending me a deluge of images of Manny Pacquiao? When can I have my normal night minus Manny singing La Bamba, Manny eating sinigang and bihon before his fight, Manny being the biggest little man in the world, Manny talking to Manny Villar on the phone, Manny playing poker, Manny kissing Jinkee, Arnel Pineda defending his rendition of the Philippine national anthem during Manny’s fight, Aling Dionisia’s prayer while Manny was exchanging punches with Clottey, Manny endorsing colored water, Manny talking about having less hairfall and avoiding dandruff, Manny using deodorant ‘apter ebri bat’, Manny sponsoring a Mass, Manny riding Air Pacquiao, Manny returning to Los Angeles with his 130-strong contingent, Manny imitating Fernando Poe Jr.’s movie punches, Manny?

When? I hope it’s going to be soon.